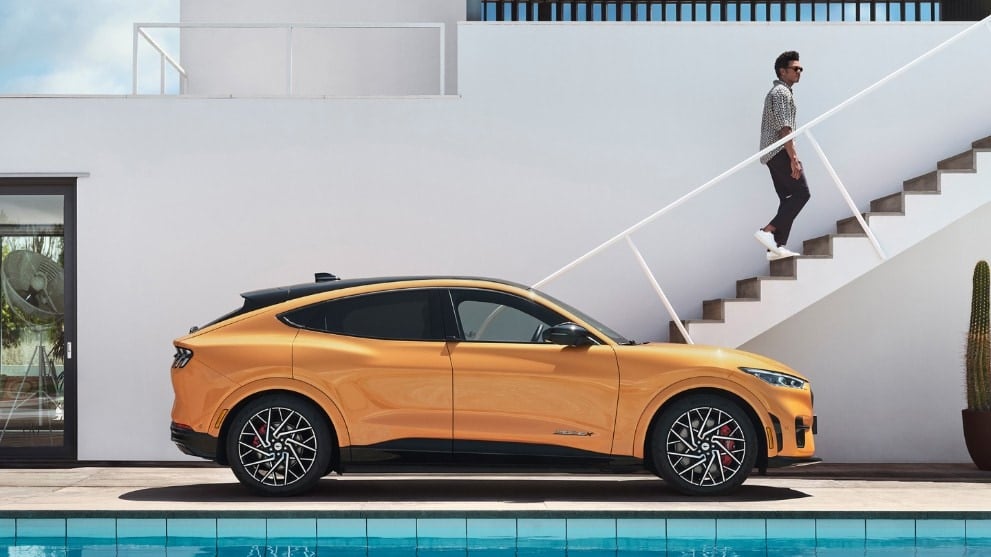 Discover the first electric Mustang of the American car manufacturer Ford: The Ford Mustang Mach E, a compact SUV coupe. The latter has been on sale since October 2020 in Europe, and the United States. Get ready to fall in love with driving again!

Ford has taken the plunge by presenting its Ford Mach e Mustang, which has made fans of the American stallion jump. Sacrilege! However, time has done its work, and fans of the brand have finally gotten used to it.

The Ford Mustang Mach-E is inspired by the lines of the mythical American model, but it is distinguished by a full grille. Also, the hood is long and muscular, and the headlights give an aggressive side. At the rear, the wings are raised, and the rear lights are in three parts with a distinctive light signature.

Nowadays, cars no longer have locks. The Ford Mach E Mustang, which is pronounced “MAC i” in French, goes even further. Without door handles, they are replaced by a button on the doorpost. You just have to press this button and the car unlocks and opens a few centimeters. The Mustang Mach-E recognizes the signal from the transponder in your pocket. The vehicle can also be accessed from your smartphone.

Inside, the Ford Mustang Mach E is equipped with a concentration of connected technologies. These are designed to give you a driving experience tailored to your needs.

For the dashboard, the Tesla inspiration is obvious. And it’s even better than on the Model 3 and Model Y. The driver has access to many settings thanks to the central 15.5-inch touch screen, oriented in portrait format. This tablet has a thumbwheel at the bottom, which makes it easier for you to navigate through its menus. Also, the dashboard is equipped with a Bang&Olufsen sound bar.

Behind the steering wheel, there is a second rectangular screen of 10.2 inches. It is 100% digital and serves as an instrument panel, with the speedometer perfectly visible. This screen is still welcome, and prevents the driver from looking away.

The level of equipment is also on point: power, heated and ventilated seats, heated steering wheel and USB-A and USB-C outlets, both front and rear.

The Ford Mustang electric is able to accommodate up to 5 people, with its 4.71 m length for a width of 1.88 m, and a height of 1.60 m. The Ford Mach E keeps the mythical silhouette of the model. Its generous wheelbase is almost 3 meters long (2.92 m to be exact).

The SUV has two trunks. The first is in the rear. A traditional trunk of 402 liters and going up to 1 420 liters by folding the rear seat. The cargo volume increases to 519 liters in 5-seat configuration, loaded to the roof. The second is under the front hood (frunk) with a capacity of 81 liters. Enough to accommodate a carry-on suitcase without hindrance.

In rear-wheel drive, the Macha E Mustang develops between 269 and 294 hp for a torque of 430 Nm, depending on the type of battery chosen. In its basic version and in all-wheel drive, the Ford Mustang electric accumulates between 269 and 351 hp of power, for a torque of 580 Nm. With its GT version, the power climbs to 487 hp and the torque to 860 Nm.

Acceleration is relatively straightforward. For the base version, the 0 to 100km/h is reached in 6.9 seconds, and in only 4.4 seconds for the GT version. Top speed is limited to 180 km/h and 200 km/h for the top-of-the-line GT model.

The Ford Mach E Mustang is available with two battery configurations. The first, with a capacity of 75.7 useful kWh, is equipped with 288 lithium-ion cells. It offers a range of 400 to 440 kilometers in the WLTP cycle, depending on the transmission chosen, AWD or RWD version. The second, with 98.8 kWh, has a total of 376 cells and offers a range of 378 to 610 km on a single charge (depending on the power level chosen).

In both cases of configurations above, the Ford brand announces a guarantee on its batteries of 8 years or 160,000 km.

The charging hatch is located on the left front fender of the Ford Mustang Mach E. Its plug is a CCS Combo type. Recharging is as easy as recharging your smartphone. For this, the Mustang Mach-E offers two possibilities:

With the Ionity network, the battery allows an average autonomy of 119 km after 10 minutes of charge. Time for a break on the highway, the ideal option to have a coffee or a bite to eat.

The finishes of the Ford Mustang electric

All you have to do is choose the finish that includes the equipment you want.

Price of the Mustang Mach-E

The Ford Mustang Mach E is available from €60,700 in two-wheel drive (RWD) version and with the small 75.7 kWh battery. At this price, this model is unfortunately not eligible for the ecological bonus.

The Mercedes EQC 400 and also the BMW iX3 are the main competitors, but less frontal and a bit more expensive.

Where is the Mustang Mach-E manufactured?

The Ford Mach E Mustang is produced in the Cuautitlán Izcalli assembly plant in Mexico. In June 2021, the American carmaker announced that it had produced more electric Ford Mustang Mach-E, 27,816 units, compared to 26,089 for the Ford Mustang thermal.

The Mustang Mach-E is undoubtedly a nice high-end electric car, with its qualities but also some flaws. This SUV has many engines and batteries. On the road, it is just as good in dynamic driving as in more conventional driving. The American model will have to compete with the Audi Q4 e-Tron, which has the same power but is more expensive. So, is it a favorite?

Mercedes EQS: the dawn of a new era 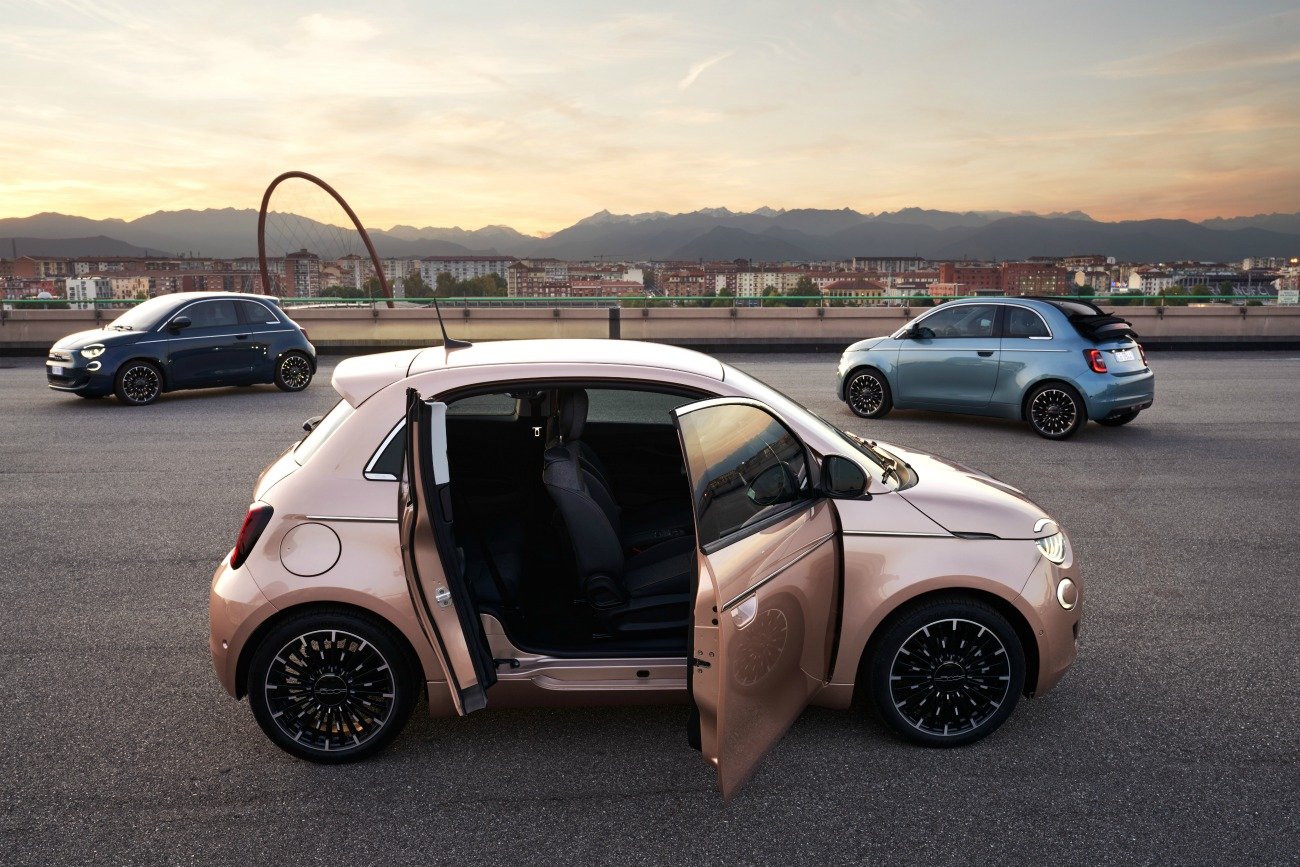